The exceedingly strong numbers of the report diminished concerns about the United States entering a recession. While this optimistic report bodes well for economic growth, it certainly does not address inflation.

However, it does change market sentiment which had been intensely focused on the last two GDP reports. On July 28 the government released the advance estimate of the second quarter GDP. The report revealed that the GDP had decreased at an annual rate of 0.9% during the second quarter of 2022.

Earlier this year the BEA reported a decrease in the first quarter GDP of 1.6%. The widely accepted definition of a recession is an economic contraction over two consecutive quarters. 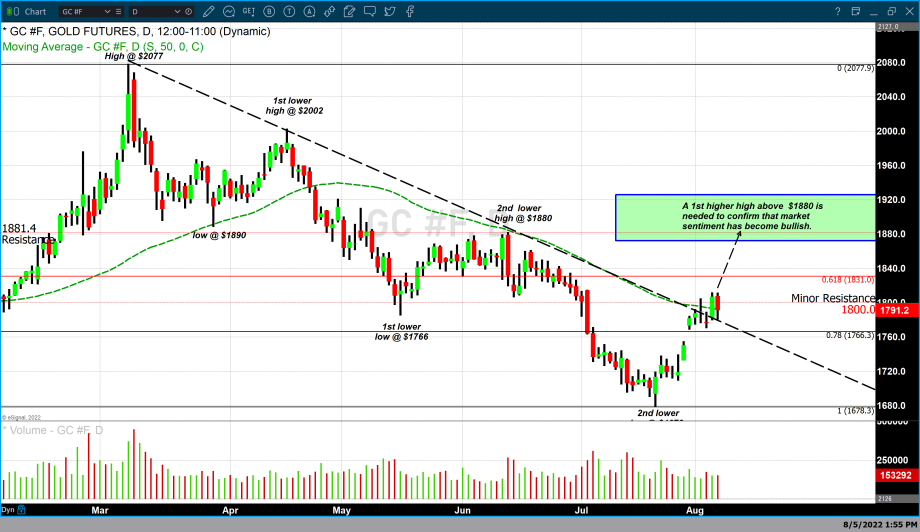 The fear of a disappointing jobs report that pressured yields on U.S. Treasuries and the dollar lower was reversed. The dollar gained 0.8% which is equal to Thursday’s decline. Gold gave up roughly half of the $30 gain Thursday declining by $14.50 on Friday. As of 6:25 PM EDT on Friday, gold futures basis the most active December contract was fixed at $1792.40.

Spot or physical gold lost $15.57 and was fixed at $1776.40 according to the Kitco Gold Index. On closer inspection, the KGX revealed that $13.60 of Friday’s decline of was a direct result of dollar strength, and a fractional decline of $1.20 was the result of traders bidding gold fractionally lower.

Gold futures closed above $1800 Thursday and the 50-day moving average was significant, however, very short-lived. It is also less likely that we will see gold recover quickly in that Friday’s jobs report strengthens the resolve of the Federal Reserve to raise rates by another 75 basis points in September.

This will also be highly supportive of the U.S. dollar as we saw in trading today.

According to Michael Hewson, chief market analyst at CMC markets, “Today’s labor market report is bad news for gold bulls, with next week’s CPI report the next key test,” the bearish sentiment reflected in the above quote was a common theme amongst other analysts.

Bart Melek, head of commodity strategies at TD Securities said, “Gold had recently rallied on the thought that the Fed will shift from hawkish to dovish. But the jobs data shows the U.S. economy is strong, and this can prompt the Fed to be more aggressive, which is not a good story for gold,” Melek added that the “next catalyst for gold prices will be the US CPI print coming out next week.”

The only wildcard is if there is an increase in geopolitical concerns regarding Russia’s war in Ukraine and/or China’s response to Nancy Pelosi’s visit to Taiwan.

For those who would like more information simply use this link.